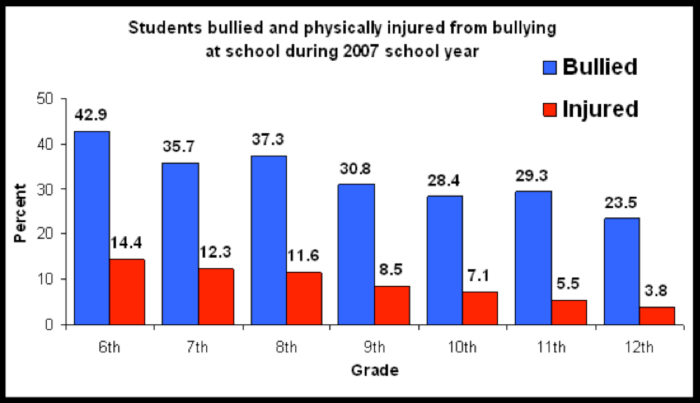 Source: Data from Table 11.2 in Indicators of School Crime and Safety, National Center for Education Statistics, U.S. Department of Education, 2009.

When I started reading the literature on Sudbury Valley School (“SVS”) I was amazed by many aspects of the school. What kind of school gives 4 year olds a vote in hiring and firing decisions, allows students to pursue their own interests, and does not have mandatory classes nor tests and grades? The more I read the more intrigued I became.

While bullying is prevalent in traditional schools (see chart at the top) it rarely happens at SVS. Why? Peter Gray, whose son has attended SVS for many years and is a staff member now, has studied the school extensively. In his book Free to Learn he provides several reasons:

“If one child appeared to be picking on another, older children would step in quickly and stop it… Moreover, the democratically created rules and judicial system prevent serious bullying. A student who feels harassed in any way can “bring up” the offender, to appear before the Judicial Committee, which comprises school members of all ages. Because students make the rules and have responsibility for enforcing them, they have far more respect for the rules than do students in a standard school.”

During my visit to SVS at the end of October last year I gained a deeper understanding on what Gray meant and why bullying is a not an issue there.

There is no hierarchy at SVS and each member of the community is respected as an equal. A 4 year old has the same rights as an experienced staff member. We are social beings and when we are treated with respect we are very likely to reciprocate and treat others in a respectful way. This becomes self-reinforcing and transforms the way students interact with each other and how students interact with staff members and vice versa.

When students are not artificially separated by age they tend to mix freely as people do in real life outside of traditional schools. When they don’t compete for grades and approval from teachers they co-operate and learn from each other. When students at SVS engage in sports they don’t try to win at all costs, but rather make sure that the process is fun for all involved parties and that no one gets hurt.

Of course, it doesn’t mean that SVS is completely free of teasing and bullying. Actually, there was one case of racial abuse during my visit. I didn’t see it myself, but I attended the Judicial Committee (“JC”) meeting, in which it was discussed. More importantly, I witnessed how SVS deals with bullying when it occurs.

Student A has a concession from the school to sell food and drinks at the main lounge during lunchtime. One day, Student B purchased something and paid in all change. After Student B had left, Student A said, “Why did B pay in all change. I’m so mad. What is she, Jewish?” Student C heard this comment and filed a written complaint, which was investigated in the JC the next day.

Student A concurred with Student’s C written testimonial and pleaded guilty. It seemed to me that it was an impulsive comment. Student A is gay and a staff member asked him how he would feel if someone else called him gay. He replied that he and his gay friends call each other gay all the time. The staff member reminded him that there is difference between gay friends calling each other gay and an outsider calling him gay. At that point he realised that he had made a mistake and had hurt Student B’s feelings. Therefore, he apologised.

The case was referred to the School Meeting to determine the sentence for the offence. A staff member suggested suspending Student A from school for 1 school day. He made it very clear that there is zero tolerance at SVS for this kind of behaviour. I was surprised that Student B, who was racially abused, tried to put in a good word for Student A. There were further discussions in favour of and against the 1 day suspension, e.g. protecting the culture of respect versus the fact that Student A had apologised and showed remorse. In the end, the meeting voted that Student A should be suspended from school the next day. Although Student A was disappointed with this he accepted the decision and didn’t seem to be angry.

I was very impressed with how the incident was resolved. In particular, three things were noteworthy in my view:

I wonder what would have happened at a traditional school.